Dance of the Porcupines

John Ortberg in his book, Everybody is Normal Till You Get to Know Them offers some interesting insight into the world of porcupines. Apparently they are part of the rodent family. (I don’t like them already!)

Their Latin name literally means, “the irritable back.” And apparently they all have one. With just two 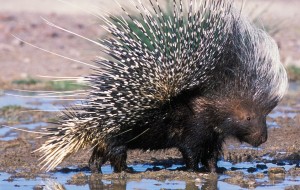 basic ways of handling any kind of relationship, they either run away or attack. And when they attack, they utilize those 30,000 quills attached to their body.

There are herds of elephants, packs of wolves and gaggles of geese, but porcupines tend to live by themselves. They travel alone. They only mate once a year. And when they do “get together,” they match up paw-to-paw, walk on their hind legs and pull in their quills. Ortberg describes that experience as the “dance of the porcupines.”

I don’t know about you, but in my world there are a few “weirdos”. (And I am one of them.) In stressful situations, more often than I would like to admit, I recoil or attack. And I know several folks who actually appear to have those 30,000 quills.

Bottom line: sometimes, it’s just tough to get along with others.

This week is a great time to replicate the dance of the porcupines. For some of us, in difficult situations or while struggling with difficult relationships, our inclination is to run away. But, instead of retreating from a situation, hiding out in our own corner of the universe, let’s reach out. Have conversations. Discuss things calmly. Seek resolutions with grace and kind spirits.

It may take some God given grace, but let’s dance a bit.

And if our first impulse is to attack, maybe it’s time to find some proactive ways to exercise self-control. Anticipate the pressure. Deflect it. Take a time out. Stop and hum, sing, pray, whatever! We need to pause, because we all know that barbs of any kind hurt. And some of us are particularly adept at shouting out the worst kind of verbal barbs. Those hurt especially bad!

Again, it may take some God given grace, but instead of exploding, let’s dance a bit.

Porcupines do successfully mate. They have learned how to get along. They hear some kind of beat, wiggle their arms and legs, stomp out a tune and life goes on. Might look very funny, but it works for them. I am thinking it may work for us too. So, let’s make it a dancing week!