Our society has ongoing dialogs about death and dying.

Earlier this year there was a flurry of articles about the ways and means that various states execute prisoners on death row. Another article highlighted the changing dress code associated with death and dying. It seems that we are abandoning wearing black as grief is becoming a much more personal thing.

Throughout the year, I have read several accounts about men and women who were declared dead but managed “to wake up.” One notable one involved a gentleman who expressed his “aliveness” by kicking the guys who were preparing to embalm him!

And most recently, we have all followed the heart-breaking story about Brittany Maynard, the twenty-nine year old advocate for “death with dignity.”

All of these discussions caused me to consider the global art project called “Before I Die.” What started as just an experiment in trying to turn a run down public space into a shared space with meaning has taken off. At last count, there were over 400 such walls in 60 countries where individuals could powerfully turn their dreams into words.

Imagine a large flat wall, perhaps in a tough part of town where people have taken a big marker and filled in the blank to this phrase: “Before I die…” Young and old alike have taken to these public forums to express some of their inner most desires.

On the serious side, they wrote: “Abandon all insecurities,” “Find what I am Looking For,” “Heal,” “Learn to be Brave,” and “Right all my Wrongs.”

On the silly side, they wrote things like: “Sleep with a Harp Player” and “Eat a salad with an Alien.”

Some wrote about trips they wanted to take (”Ride a Motorcycle Across South America”), others had lofty goals like “Help People through Neuroscience.”

The most poignant ones were focused on others and made meaningful comments like “Fix Nick’s car” and “Teach kids to live, love and be free.”

It occurs to me… you and I ought to write on such a wall this week. Even if we use invisible ink on a pretend wall, let’s consider what we should be doing before we die. 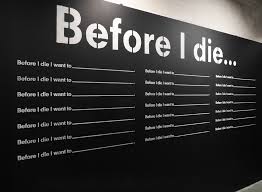 Is there a letter to be written? Is there a wrong to be made right? Does someone need our forgiveness? Can we bless a shut in? Is there a gift to be made? Does a name come to mind that we need to share the gospel with? Let’s be about our Father’s business.