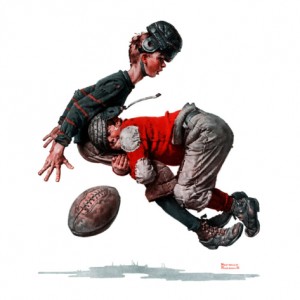 One of our elementary boys football teams lost every game this year. They were on the young side, had no experience and tended to enjoy each other’s company much more than learning football fundamentals.

After the last game, one of the boys gave his mom some very insightful feedback. He told her that the most frustrating part of the season was all the “positive encouragements.” He said that the parents just kept throwing comments at them, comments like “You guys did awesome,” “Great game,” and “Its just a learning experience.”

He said that he wished they would just stop trying so hard to make them feel better. Intuitively he knew they preformed poorly. His mom asked what he would have preferred to hear and he said, “Maybe just you tried your best, now suck it up and try again.”

After I heard of his exchange with his mom, I did some research into the difference between encouragement and praise for kids. As you might imagine, there are psychologists on all sides of the issue. Some were very worried about kids’ self esteem. Others were concerned about the “manipulating effect” some of these comments can have on the children. They warned against creating “praise junkies.”

Clearly the scripture enjoins us to be about the business of building up each other (Rom. 14:19), but I do think our culture has tipped the scales with its incessant praise. Not only does it give children a false sense of what life is really like, it can distort the very reason for doing our best. With too much praise, children eventually learn to do things not for their own sake or for the joy of the accomplishment, but only in order to please others.

So this week, parents, coaches, teachers, let’s all encourage those children that are in our lives… but be careful to not over do it. Let’s tell that eleven year old, something like:  “I saw you try to throw a good spiral. I think some more practice would help. Want to hang out in the park this afternoon and throw a few?”

Maybe then they won’t reject our well-intended encouragement and try again!