I am Not Afraid

Like everyone else, I have been closely following the recent events in France. Seeing that extremely large crowd marching in solidarity was powerful. But the most moving visual element was the sign draped around the fountain that read, “I am not afraid.” 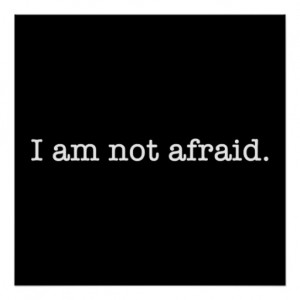 The French people were making a unilateral statement that in spite of the dangers associated with terrorist attacks, they as a people would not be forced into a cowered position of fear. I deeply admire that attitude.

I especially admire that mindset when you consider the global risks that are likely to affect all our lives. According to USA Today, as a group we are most likely to be significantly impacted by things like national conflicts, extreme weather events, natural catastrophes, water crises or cyber attacks.

When a large group is affected by disaster, we often ban together and support one other in practical ways. In 2004, when the Tsunami hit South East Asia, the world responded with financial gifts totaling $800 million dollars.

But what happens when disaster hits an individual family? When dad looses his job? When mom gets sick and the medical bills exceed the family’s annual income? When a house burns down or is swept away in a flood? Or a divorce is nasty? Or a child dies?

It seems that at times like that, it’s tougher to cojure up that same brave “face” when it’s just the family gathered around the kitchen table trying to make sense of things.

The truth is though, the confident response for believers should mirror the attitude of the French people: We are not afraid!

The Lord knew that we are fearful beings. To help us, He included 365 different Biblical references (one for every day of the year) of His dynamic statement “Do not fear!”

So this week, if you or someone you love is facing a major disaster of any kind, let’s take a moment and remember who is in charge. It’s not us. It is our heavenly Father. And with that thought firmly ensconced in our hearts, let’s mimic those folks in France and shout out loud, “I am not afraid. He will help me.”