In 1989, Stephen Covey wrote his acclaimed book 7 Habits of Highly Effective People: Powerful Lessons in Personal Change. That book sold over 20 million copies and has influenced untold thousands of executives all around the world (including me). 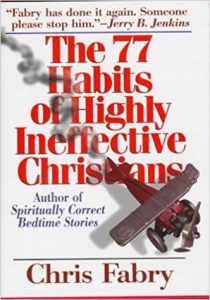 Almost ten years later, a Christian author and broadcaster, Chris Fabry wrote a humorous “reflection” of Covey’s book and titled it, The 77 Habits of Highly Ineffective Christians. With great irony, Chris’s little book forces the believer to take stock of some of our “go to” expectations and beliefs.

Fabry pokes fun at all the “Christian” habits that we believe will ensure our contentment. Unfortunately though, those habits will only guarantee to make us unhappy, unfulfilled and incredibly ineffective as Christ followers.

His play on words amused me. Chapters like “Provoke Your Children to Wrath,” “Live an Unexamined Life” and “Cultivate Prejudice” were entertaining. His advice to live like a chameleon, live in the future, live in the past and leave fasting to weird people were insightful.

But habit number 69 was a favorite. It is called, “Make Worship Optional.” In part it reads:

“For committed Christians it is impossible to look at scripture or a sunrise and not worship God from the depth of the soul. It is impossible to ponder God’s holiness without a sense of wonder and awe. But I encourage you to think of worship as something you do only when you are singing in a formal service. Worship should not be a minute-by-minute lauding of a loving God, but a few sentences of responsive reading you do every third week.”

He goes on to suggest that we look at worship as a “nebulous add-on,” a kind of holy option. He says, “Convince yourself that worship can’t be planned, it just has to happen. In this way worship becomes an event rather than a lifestyle.”

Now there is a habit that will definitely make us ineffective Christians!

This week let’s all push back (hard) against anything and everything that tries to marginalize our worship of the Lord. Let’s let that worship break out in the car (or shower). Let’s worship as we first wake up and as we drift off to sleep.

Let’s determine to be an effective believer and worship the King!

“Ascribe to the Lord the glory due His name, worship the Lord in the splendor of His holiness.” (Psalm 29:2)