Temptation comes in many forms. It’s almost as if Satan and his gang meet weekly and personally manufacture just the right “trip ups” for each of us. Of course the real issue is how we deal with the inevitable traps laid for us.

Thinking of how to deal with temptation caused me to remember a couple of Greek myths about the Sirens. You may remember that the Sirens were weird creatures with the body of a bird and the head of a woman. They lived on an island and their main goal in life was to lure sailors to their destruction on the rocks surrounding that island. 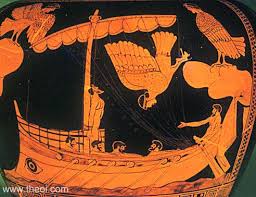 One story featured Ulysses. As his boat approached the island, he told his men to put wax in their ears so they could not hear the song of the Sirens. And then he had them tie him to the mast of the ship. As the seductive sounds swirled around alluring them to the shore, Ulysses begged his men to let him go. But instead, they bound him even more securely until they passed the island and the temptation was gone.

Another story tells the tale of Jason and the Argonauts who set sail in search of the Golden Fleece. On Jason’s ship was the king of minstrels, Orpheus. As their ship sailed along the shoreline where the bewitching sounds of the Sirens threatened to overcome them, Orpheus used his skill with the lyre to make music that could drown out the sounds of the Sirens. He urged the crew to join him and “sing louder.”

On the one hand, when we find ourselves “bent” toward an addiction of some kind (might even be towards double stuffed Oreos), the “tie me to the mast” approach might work. Having others hold us accountable is a wise approach to dealing with “the sin that does so easily beset us.” Good friends will help us avoid the situations that cause slippery slopes toward sin.

And on the other hand, when we find ourselves in the midst of a turbulent set of circumstances, maybe the best approach is to just “sing louder.” I often have to “sing louder “ during my own quiet time, or in the car in route to an important meeting or just before I engage in a controversial conversation. I truly need the sounds of joy to permeate my heart before my mouth engages.

In I Cor. 10, Paul observed that God will always provide a way out or means to deal with temptation. So this week, if you find yourself engaged in that kind of battle, consider the two approaches. Find a friend who “tie you down” or sing louder. Both approaches will work!