Recently, I have been having some lingering significant pulmonary issues. So last week, I had to spend seven hours in our local emergency room. While I was there, the doctors ruled out all kinds of nasty possibilities and sent me home with tons of medicine and assurances that I would soon be on the road to recovery.

But those seven hours were so instructive as I watched a microcosm of humanity wander by my room. Across the hall was a 17 year old who had apparently admitted herself for some kind of destructive behavior. She had a guard at the door. When her mom finally arrived, it was like witnessing a soap opera.

The child was emotionally scattered and the mom was no better. I thought I was listening to the junior high kids squabble in front of their lockers.

Down the hall, an older woman struggled to walk with her daughter’s assistance. The daughter was trying so hard to be patient with her frazzled mother. She urged her to just “put one foot in front of the other.” 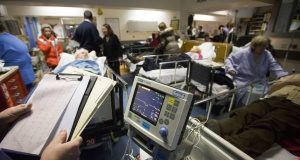 All night, I heard code greys and code blues. One room was closed off with a sepsis alert. Two nurse’s aides spent quite a bit of time bemoaning the behavior of patients out in the waiting room. “Watch out for the gal with the sprained ankle, she is a piece of work!”

And every now and again, the loudspeaker system played a sweet lullaby indicating that a baby had just been born up on the maternity floor.

The bustle of all that activity, much of it filled with pain and misery struck me hard. By God’s amazing grace, I live in a blessed bubble. Because of His mercy and His blood spilled on the cross, I have a relationship with the Son of God. He is real. His gifts are abundant. His peace is readily available.

But not everyone else enjoys those incredible blessings.

Perhaps this week is a good time for you and I to take a look around our world and notice, really notice, the struggles of folks right around us. They need a Savior and we need to share the good news.

It’s not appropriate to just live in a blessed bubble!