I think it is worth sharing part of her story with you this week.

“In Islam there are 99 names for Allah. Not one of them is ‘father.’ To Muslims, God is not a father, he is a judge. I am from a family of six children. My father never showed us love. Whenever I heard of people speaking about the love and support of their fathers, I had no idea what they meant.

My father was an angry man. He abused us emotionally and physically, especially my mother. She was beaten several times to within an inch of her life. She put up with this in order to protect us children.

I always had a negative view of men. I questioned why God had given men such power. I tried to be a strong woman. I was also depressed and tired of life.”

Through the grace of the Lord, this young woman came in contact with a Bible believing church and came to trust Jesus as her Savior and healer. But she faced a great challenge. As she said, “I had to accept God as my father. In my mind, this word was not a word of honor toward the God that I had come to know. To me ‘mother’ would have been a much better word.

But God wanted to reveal Himself to me. He did this with total patience and gentleness.”

With time, her mother became a Christian. So did her brother, sister, a nephew, and her sister-in-law. And on his deathbed, even her father asked Jesus to forgive him.

She ended her article telling the story of a friend, another Muslim girl who also couldn’t see God as Father. But after much prayer and ministry, she soon was singing songs about the Fatherhood of the Lord “as she danced before her daddy.” 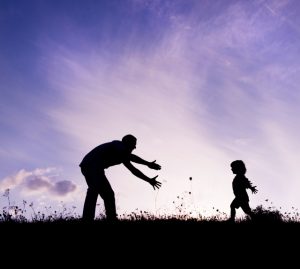 What an incredible gift, the gift to see God as a loving Father. For many of us, that is difficult. Perhaps our father was abusive, neglectful, mean spirited or just not there. Without that living example, it is very difficult to see God in such a loving manner -difficult, but not impossible.

If you or someone you care about is struggling with just such a tough concept, perhaps today is a great day to do some musing on Romans 8:15-16:

Those who have trusted Christ as their Savior do indeed have a loving heavenly Father. So this week let’s all practice calling out His relational title: Abba, Father, Papa, and Daddy!