John and Lisa Henderson live in Utah. They have three sons ages 5, 8 and 11. And according to a story in CNN Living, their boys have had a real problem with their behavior. Specifically, they have been disrespectful and acting very entitled.

The Hendersons began to focus their time and attention on the boys’ self-focused attitudes. But after several months of training, reminders and warnings, the parents took a stand…they cancelled Christmas this year for the kids. 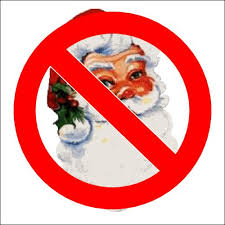 They are still decorating their home, plan to have others over for a great meal and are allowing family members to gift the kids. But “Santa” isn’t stopping by their house this year. Instead, they have taken those monies and spent it on service projects and blessings for other people.

Now, it might seem a little harsh at first read, but I think they may be onto something. The writer of the article I read suggested that instead of tangible childhood goodies, the kids are actually getting gifts of much greater worth.

They are getting the gift of consequences. How many times do we as parents threaten and yet not follow through? Pretty soon the children know we really don’t mean it. Our words lack “punch” and our training lacks meaning. We need to follow through on what we say.

They are getting the gift of perspective. The cancelling of Christmas (or at least the self-focused part) is allowing the whole family to think about what they have rather than what they want. Time spent around the dinning room table is centered on gratitude and appreciation for what the Lord has already given their family.

They are getting the gift of imagination. Instead of just sitting around feeling sorry for themselves, the parents got the boys thinking about how they might be a blessing to others. Now the kids are actively doing projects for family and friends.

And finally, the author of this article (Katia Hetter) suggested that the boys are getting the gift of family. Instead of a very commercialized event, Christmas at the Henderson house this year will be focused on Christ. As they play games, maybe sing together or do silly skits, those kids are going to do it in the context of the family unit. What a blessing.

So, maybe this week we all ought to consider cancelling Christmas or at least cancelling the trivial celebrations that distract us from the babe in the manger! Let’s ignore the gift stuff and remember… wise men still seek Him.