There are many things in our culture that suggest the need to give. Sad faces of malnourished dogs and cats motivate many to donate. Graphic videos of storm-ravaged villages move folks to support relief agencies. But perhaps the most notable image that provokes giving is the sight of one of those Salvation Army red kettles (I can hear the bell ringing right now). 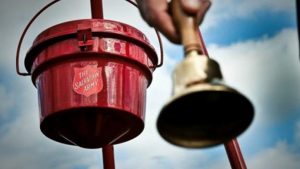 Maybe you are not familiar with the Red Kettle history. William and Catherine Booth were preachers associated with the Methodist Church in England. In 1865, they began ministering to the very poor in the East End of London.

Originally, they used preaching as their primary form of outreach. The army was mobilized against sin. But not everyone appreciated their work. The pub owners in particular protested that the conversions were shrinking the ranks of their customers.

The bar keeps and others protested at the meetings. Loud jeers and angry mobs often interrupted the services. So, the famous Salvation Army band was formed. As the angry crowd got loud, the band drowned them out.

In 1891, one of the Captains in the army, Joseph McFee was ministering in San Francisco. He was deeply concerned about the poverty stricken crowds who were going hungry during the holiday season. He remembered an iron kettle that used to sit on the pier in his hometown of Liverpool. Apparently passers-by would throw in a coin or two to help the poor.

So, McFee placed a pot at the Oakland Ferry Landing with a sign that read, “Keep the Pot Boiling.” Soon he had enough to feed the hungry over the holidays. And a movement was born. Today, The Salvation Army raises over $145 million dollars every year and about 70% comes in through those red kettles.

During this time of the year, giving seems a bit more natural for most folks. But for the believer, cheerful giving is a classic sign that Jesus reigns in their heart.

Paul reminds us, “Each of you should give what you have decided in your heart to give, not reluctantly or under compulsion, for God loves a cheerful giver.” (II Cor. 9:7)

So this week let us all focus on giving with that cheerful heart. We can tuck a few dollars into that red kettle, or drop some money in the basket at church or give through our checking account to a non-profit. There are tons of ways to give.

We can and should find individuals to help. There are college kids that need a new tire. We probably know an elderly grandma whose refrigerator isn’t working right. It will be easy to find a single mom that desperately needs some babysitting services so she can have a night out.

Or, we can seek out churches and other mission organizations to support. These institutions depend on year-end giving to help supplement their annual budgets. No gifts, no ministries.

So, whether or not we can hear that classic bell ringing in our neighbor mall, let us take to heart the Lord’s injunction to be generous and GIVE!