We’d been sitting in a restaurant for 2 or 3 hours, just catching up on the highs and lows in each other’s lives, when all of a sudden, my single and suffering friend blurted out at me, “This business of Christian liberty is the pits!”

Apparently, she had been exploring that invisible but unyielding line that each of us have in our daily walk. It’s the line between what’s scripturally allowable but personally not acceptable. It’s the border that separates the “lawful” from the “expedient” as Paul would say.

It may sound funny, but I’m more convinced than ever that this line moves.

Now, before you slap the big yellow “C” (for compromise) sticker on me…let me explain. I’m not talking about the basic issues of the Bible. There are no options when it comes to the sin issue and our salvation. But there are a whole long list of issues that come under the heading of Christian liberty. You should be thinking of topics like Christian and social drinking, Christians and card games, Christians and some forms of entertainment.

When I say that I think the line between the “do” and “do not’s” move, I mean that apparently the list on my personal score card isn’t exactly the same as the list on yours.

Let’s get a practical example in here. In Southern California, most of us have access to a pool. They are clean and warm. And, often they are full of friendly people. The men kind and the women kind.

Years ago, my very conservative church used to condemn that sort of thing as “mixed bathing.” (When I first heard that term I thought they were referring to taking a tub bath with the shower on too! What did I know…?)

Anyway, I personally do not see “mixed bathing” (men seeing women in a bathing suit in a public area) as a cardinal sin. Apparently, it definitely fits on lots of other Christians’ life score card. For me, it is a decision that’s part of our Christian liberty. 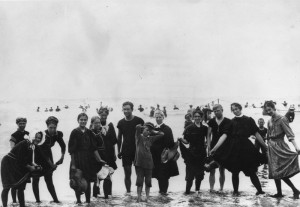 But, it’s not on my card. I’m the super modest type, a bit shy and also terribly out of shape. So I don’t troop down to the pool or the beach unless I’m sure everybody is hiding inside. (Consequently most of my swimming is done on delightfully overcast days).

The point is – the issue of “mixed bathing” (or card games or wine with dinner or, or, or) requires some individual choices. Those choices are based on our own spiritual backgrounds, cultural preferences and the leading of the Holy Spirit.

Making careful intelligent choices in our Christian walk isn’t always easy. It is especially hard if all your life “the choosing” has been done for you (maybe by your parents, maybe by your church). Sometimes the rules and regulations of some families or churches don’t leave much more for growing or choosing. So you can see why my friend lamented that Christian liberty is the pits.

But it doesn’t have to be…liberty can be freedom. Freedom to choose. Freedom to enjoy. Freedom to grow. Paul declared in 1 Corinthians 6:12b – “All things are lawful for me, but I will not be mastered by anything.”

So this week, let’s consider the freedoms afforded us in Christ and temper them with tons of self control.