During my recent five-week RV trip around the U.S., I made a special stop at Gettysburg.  I have been there several times and I love hearing the stories of the individuals who fought so valiantly on both sides that fateful July 1863.

One of my favorite stories involves the commander of the Union forces up on Little Round Top, Joshua Lawrence Chamberlain. Chamberlain was a 34-year-old schoolteacher from Maine. On July 2nd, he and his men were stationed at the far left edge of the line of battle.

They were told,  “Whatever you do, you can’t let them (the Confederates) through here.”

All day long, the men of the 20th Maine fought off the vicious attacks coming up the hill to their position. Six months earlier, they were a thousand strong, but by late afternoon, they were down to only 80 men and they were out of ammunition. 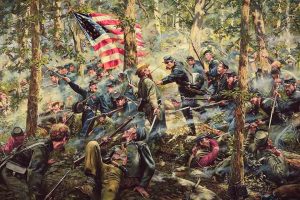 Chamberlain knew they could not retreat. And, they did not have the bullets to form a reasonable defense. As he considered his options, he just instinctively chose the one that required the most courage.  He shouted “Fix the bayonets now and execute a great right wheel of the entire regime. Swing left first.”  In Army speak, that means “Charge.”

To his great surprise, as the men in blue charged down the hill, the Confederate solders turned and ran. They made the assumption that the company from Maine had hidden reinforcements. In less than ten minutes, that ragged group of exhausted solders, without any ammunition, captured over 400 rebels and won the day.

Historians tell us that particular battle was extremely pivotal. Had the Union not won that one charge, we would not have a United States of America but likely a fractured continent that might look a lot like Europe. Our international strength, political power and ability to influence the world would never have come to fruition.

And when you think about it, the only resource that Chamberlain really had was courage.

Right now, I have a long list of friends who are struggling with significant life challenges. Their “company” has shrunk, their resources have been exhausted and their future looks bleak.

So maybe this week is a great time for us all to consider the value of COURAGE. Four times in the first chapter of Joshua, Israel’s new leader is told to “be strong and courageous…” And that courage was to be rooted in his relationship to the Lord.

The same principle applies to us. Regardless of the circumstances in our lives, we are commanded to lean into our relationship with Christ and draw our strength from Him.

“Be courageous. Do not be terrified, do not be discouraged, for the Lord your God will be with you wherever you go.” (Joshua 1:9)