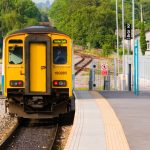 When I lived in England, I loved sitting in those massive train stations and listening to all the announcements. I can still hear pronouncements like “The 4:15 non-stop to Manchester is now departing on track number six. All aboard!” rolling around in my memory banks.

The term “departure” is an interesting word in scripture. In II Timothy 4, Paul writes, “For I am now ready to be offered, and the time of my departure is at hand…” He did not use the usual word for “death.” Instead, he chose to use the word “departure” and it is just so rich with meaning.

One way of explaining that term is to imagine a soldier taking down his tent and striking camp. He has been given another assignment and he is on his way. This “departure” concept can also mean to lose a boat from its moorings, and set sail for another destination.

Paul understood human nature and wanted us to grasp the positive aspect of ending this life. He knew that dying isn’t an end. Rather, it is like moving into different quarters or letting our moorings loose so we can sail to a heavenly shore. In both scenarios, the change was a good one. It is something to be anticipated with much joy.

With that background, I was saddened this week as I saw an article about the last words of many famous people. What was on their mind those last moments this side of glory intrigued me.

Churchill is reported to have said, “I am bored with it all.” As a housekeeper was praying over Joan Crawford, she used a curse word and shouted, “Don’t you dare ask God to help me!” And right after John Belushi was injected with drugs, he cried out, “Just don’t leave me alone.”

At the last moment of our earthly lives, I am wondering what you and I might say.

Maybe this week is a great time to consider the rest of that passage in II Timothy. Paul goes on to say, “I have fought a good fight, I have finished my course, I have kept the faith: Henceforth there is laid up for me a crown of righteousness which the Lord, the righteous judge shall give me at that day…”

Now there is a DEPARTURE worth having!