I have been involved in preparing some employee reviews lately. These are serious responsibilities of supervisors everywhere. But I found an old article that was taken from some actual Federal employee reviews, and it sure made me laugh. It says in part:

“Since my last report, this employee has reached rock bottom and has started to dig.

Works well when under constant supervision and when cornered like a rat in a trap.

He would be out of his depth in a parking lot puddle.

He doesn’t have ulcers, but he’s a carrier.

Takes him 2 hours to watch 60 Minutes.

The wheel is turning, but the hamster is dead.”

Obviously none of those comments would ever be part of my summaries, but it did cause me to think a bit about how God might write up our review. The Biblical reference that came immediately to mind is found in Matthew 25. A master took a journey and entrusted his servants with varying amounts of resources. He obviously expected them to invest their time and talents to gain some kind of profit. 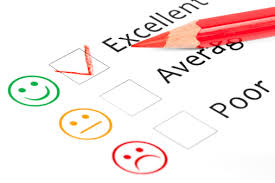 When he returned, he expressed his approval with that very well known Biblical phrase, “well done thou good and faithful servant…”

Regardless of our skill set, our cultural background, our financial situation and the particulars of life’s opportunities, that’s the phrase every child of God longs to hear at their heavenly “review.”

We might be lacking in mental or physical gifts. We might be stuck in one of society’s dead end corners, but we all want to have the approval of our Heavenly Father.

This week might be a great chance to plan ahead a bit. If we are hoping for a great “heavenly review,” what do we need to start or stop this week to affect that summation? Is there an attitude to adjust? A habit to change? A motive to question? Something to repent? An apology to give? A wrong to make right?

If we get a jump-start on it, maybe our big review will say: “Works very well when she (or he) remembers who she (or he) is working for and why they are needed for the job. Well done.”