Back in 1828, Webster’s dictionary defined an “excuse” as an allowance for a shortcoming or an attempt to vindicate. It sure seems like the folks in our society are experts at expressing classic excuses.

If we are late for an activity or meeting, we blame it on traffic (not on our lack of organization or delay in leaving). If we fail to meet a deadline at work, we offer up a litany of reasons why others caused the project to be delayed and highlight why we are vindicated.

Nothing seems to be our fault. No one wants to assume responsibility for his or her actions. We live in a world filled with excuses, excuses, and excuses. And I am convinced that it is created a world of mediocrity and we all seem to be okay with it. 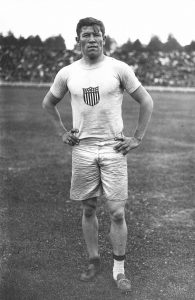 I got to thinking about this topic recently when I saw an old picture of Jim Thorpe. You may remember that Thorpe was the American Indian from Oklahoma who represented the U.S. in the 1912 Olympics. In the picture I saw, Thorpe is wearing different socks and shoes on his feet.

It seems that on the morning of his competitions, Jim’s shoes were stolen. So he had to go dumpster diving and ended up with one shoe that was too big for him. He stuffed a second sock on and went to his events. He won two gold medals that day wearing two different shoes and three socks!

The punch line to that story is the lack of excuses. Thorpe just put his head down, found shoes and socks and got the job done. He offered no vindication nor did he ask for any allowances.

This excuse-making thing started back in the Garden of Eden when Adam blamed Eve for his disobedience (Gen. 3:11-13). Moses was an expert in excuse making. He told God he had no experience in negotiation; he was reluctant because he feared the retribution of the Egyptians, he didn’t know what to do if they didn’t believe him and he made sure the Lord knew he stuttered badly.

I think Benjamin Franklin was correct when he remarked that “he that is good for making excuses is seldom good for anything else.”

So this week, let’s remember the injunction in Romans 1 about suppressing the truth. Let’s tell it like it is. “I was late because I slept in.” “I didn’t get the report done because it was hard. “ “I was speeding and I have no excuse.”

If Thorpe can overcome his circumstances and win two gold medals, I am convinced our truth telling will “win” us some respect.