I love basketball. College basketball is the best! When I saw this quote from Michael Jordan, it really resonated with me. He said, “I’ve missed more than nine thousand shots in my career. I’ve lost also lost three hundred games. Twenty-six times, I’ve been trusted to take the game winning shot and missed. I’ve failed over and over and over again in my life. And that is why I succeed.”

Twenty-six times in his career, his coaches, his teammates and all the fans expected him to make that winning shot, and he didn’t. That is a lot of pressure to succeed. And yet, it is that very series of “goofs” that made him the incredible basketball talent he was!

He was in the habit of “failing forward.”

The apostle Peter was in that habit too. Over and over again, his impetuousness got him in trouble. He failed often. He failed big. And he learned from his failures. We can see the results on the Day of Pentecost in Acts 2. His previous failures set him up to be used in such a significant way that 3000 people were added to the early church that day. Peter was also in the habit of “failing forward.”

And we should be learning how to fail gracefully too. This week might be a great opportunity to do a little bit of inventorying of our “stocks of courage.” Are we willing to try some new things, even if we fail the first few times?

Maybe we can just call the new adventures an “experiment.” Give yourself some wiggle room if the concept doesn’t work. There is always something to learn even from a failed recipe or crazy idea that won’t quite get off the ground. 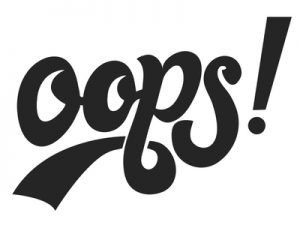 And try to avoid internalizing your reaction to the failure. Just consider it an “oops” and move on. Obviously if it is moral failure, our response needs repentance and a change of heart and attitude. But a simple goof after a sincere effort simply needs to be acknowledged. Be disappointed, not crushed.

Take a bit of time to evaluate that effort. What went wrong? How can you improve? What should you avoid next time? How can the “failing forward” project you into some new territory of exploration, adventure or service?

Woody Allen once advised, “If you’re not failing every now and again, it’s a sure sign you’re not trying anything innovative.”

If all of our efforts are focused on avoiding failure, we will never really succeed. Serving the Lord takes some risks. We may need to stretch a bit, try something new, volunteer in a new way. Get involved in a new ministry.

And if it doesn’t go perfectly the first time, consider the words of the Irish writer, Samuel Beckett. His advice: “Go on failing. Go on. Only next time, try to fail better.”