In Revelation Chapter 6, the souls of those who have been slain because of the Word of God cry out in a loud voice, “How long, Sovereign Lord, holy and true until you judge the inhabitants of the earth and avenge our blood?”

That verse came screaming back into the forefront of my mind as I read the recent account of the death of four Wycliffe Bible translators (See the “Christian News Journal”). Somewhere in the Middle East (the exact location and time line of events are being withheld for safety’s sake), some militants broke into a Wycliffe office and shot two of the workers. The lead translator was attacked, but he was protected as two of his friends threw their bodies on him and shielded him from the blows. Those two died also and several others were injured.

Out of such tragedy though, there was one huge blessing. The computer hard drives that contained all their translation work were not destroyed. So other missionaries vow to carry on the work of Bible translation.

Missionaries labor all around the world doing all kinds of service. Some of their work is focused on church planting and evangelism. Some of the effort is centered on discipleship programs. Others emphasize humanitarian efforts. And still others like these Wycliffe missionaries and those who work with New Tribes Missions concentrate their efforts on Bible translation.

According to the folks at New Tribes, it takes a missionary an average of 15 years of living in a tribe, learning a language, translating that language in order to ultimately produce a Bible that can be used by those people. And the monetary cost is about $35 a verse. 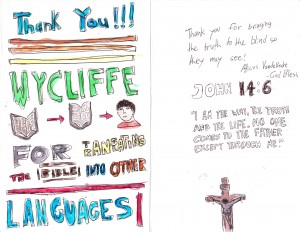 There is a huge price tag on every Bible that is translated. And it’s not just that dollar amount that should be considered. It is the lives of the modern day saints who leave the comforts of home and go somewhere else, immersing themselves in the lives and languages of strangers-just so others can read and understand God’s Word.

This week, on their behalf, we ought to cry out with the crowd in Revelation 6 and ask our heavenly Father, “How long, Lord until you avenge their blood?” And in the meantime, as we wait for His return, let’s pray.

“Lord, until you return and judge your enemies, please protect those who go and give of themselves so generously. Father, particularly this week, protect those who labor over words and syntax, who spend their days parsing verbs and diagramming sentences. Protect those who are committed to the promulgation of your Word. We pray in Jesus’ name.”