How Much is Enough? 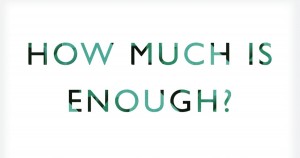 I have a friend who has often remarked to me that she wishes her family had just a little more income (and probably a little less expense). She captures the sentiment by saying she just wishes they “had enough.”

With her comments as a backdrop, I was fascinated by a study I saw in one of John Ortberg’s books (When the Game is Over, It All Goes Back in the Box). Ortberg was contrasting household items that were “rated as necessities by Americans in 1970 as compared to 2000.

My favorite was the need to have more than one phone per family. A mere 2% felt that way in 1970. But thirty years later 78% of our families must have a second or third or fourth phone!

Clearly our “wants” have turned into “needs.” And the sad thing is, once we construct mental rationales for considering ourselves deprived, we just accent our unhappiness.

The Bible has something to say about “enough.” A farmer in the New Testament was experiencing great success with his crops. And he asked, “what shall I do since I have no place to store my extra crops?” That rich fool responded with “I will tear down my barns and build bigger ones.” Bigger barns was the cry!

Maybe this week we can mirror the attitude Paul was expressing in Philippians 4:12: ”…I have learned the secret of being content in any and every situation.”