How to Become Awesome

At some point during the administration of Iraq’s Saddam Hussein, he decided to anoint himself as dictator. And he went a step further and gave himself a new title. He called himself, “The Awesome.”

Now with a bit of flippancy, I can see where all of us might want to ascribe for ourselves such a title.  It might be great to be known as “Sherry the Awesome.”

But upon serious consideration, we know that there is so much more that we ought to be striving for than just “awesomeness.” And such a pursuit requires a ton of intentionality.

I find so much of that kind of intentionality in the 18th century American philosopher, theologian and revivalist, Jonathan Edwards (1703-1758). He was a remarkable figure in the early American church. As a 12 year old, he enrolled at Yale fluent in Latin, Greek and Hebrew and graduated as a valedictorian.

Eventually he served as the President of Princeton University and was a major figure preaching through America’s First Great Awakening. Early in his ministry, he wrote 70 resolutions that he lived his life by. On a regular basis, he read and reread those resolutions, seeking to implement them in a practical way.

I am not sure that his contemporaries would use the term “awesome” for Edwards. But with such an intentional focus on becoming more like Christ, his life had an amazing reverberation down through many generations.

Edwards married his teenage sweetheart and they had 11 wonderful children. One study traced his family tree and concluded that “one U. S. vice president, 3 U.S. senators, 3 governors, 3 mayors, 13 college presidents, 30 judges, 65 professors, 80 public office holders, 100 lawyers and 100 missionaries” all ultimately came from his humble home in Massachusetts.

Now that is pretty awesome! 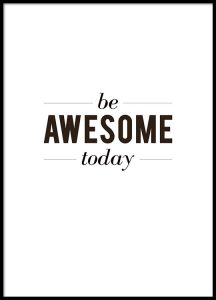 So maybe this week is a great time for us to consider some practical resolutions that can guide our behavior and attitudes. Let’s go online and check out Edward’s list, choose a few for ourselves and maybe add some new ones. Let’s be intentional about our growth in Christ.

“Resolved, never to do any manner of thing, whether in soul or body, less or more, but what tends to the glory of God…”