In 2013, there was a terrible airplane crash up in San Francisco. Asiana Airlines Flight 214 was in bound from Korea. The pilots misjudged the altitude of the plane and hit the seawall upon their descent.

There were 291 people on board that plane and 187 of them were injured, 49 seriously. And three people died in the crash. It was a tragic moment. The entire tail section struck that wall and came off. The evacuation chutes pinned some flight attendants to the interior wall of the plane. Passengers trampled over each other trying to get out.

I remember the accident well. I happened to be watching the news as they quickly got on scene and recorded the event. And I couldn’t believe my eyes…people running away from the plane were dragging their carryon luggage behind them!

What could possible be so important in that bag at that moment to warrant dragging that bag down the aisle, out of the plane and along the runway?

Clearly as a culture, we have way too much focus on our “stuff.”

I thought of that scene as a contrast to a brief story a friend shared with me this week. It seems a little girl was aware that her sister’s birthday was coming up. And the little girl was struggling with her attitude. Her stomach churned as she thought of the cake her sister would be eating, the colorful presents she would get and the attention as everyone would be singing to her.

Wisely her mother had a little mother/daughter chat and finished the discussion by giving the little girl a piece of paper with just three words written on it. The paper said, “I GET ENOUGH.” Her mom wanted her to remember that she gets enough cake throughout the year. She has people celebrating her and her accomplishments all the time. She gets plenty of attention.

The paper was a reminder, a perspective giver.

When we start to grip our possessions like those Asiana passengers were clutching their bags, we too need a scrap of paper to review: “I GET ENOUGH.” I get enough money for my needs. I get enough time for my tasks. I get enough relationships for my well-being. I get enough.

Jesus hammered that truth home in Matthew 6. So this week, take some time to listen to His words:

“So don’t worry about these things, saying ‘What will we eat? What will we drink? What will we wear?’ These things dominate the thoughts of unbelievers, but your heavenly Father already knows all your needs…. He will give you everything you need.” (NLT)

If you have to shove a little piece of paper in your pocket to help you remember, go ahead, write it out: “I GET ENOUGH.” 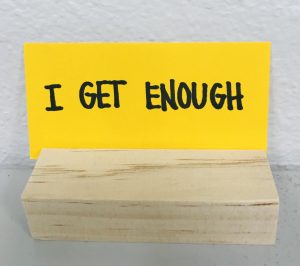