If you have ever done any home repair jobs, tinkered with a wood working project, made anything from a pattern, you know the expression “measure twice, cut once.” It is an injunction to be careful about your preparation. Preparation is often more important than the actual steps of accomplishment. No prep equals a lousy job.

There is a great biblical example of this important principle in the life of Nehemiah. In the 8th century B.C., Assyria devastated the northern kingdom of Israel. One hundred years later, Babylon destroyed the temple in Jerusalem and deported up to one third of the population of Judah.

They were in captivity for 70 years. But God promised they would return to the Promised Land and so they did. Zerubbabel led the first returning group of almost 50,000. About 80 years later Ezra led a smaller group back. And then we get the story of Nehemiah.

He was a cupbearer to the king Artaxerxes. (A cupbearer was a senior servant that made sure the king’s food wasn’t poisoned.) God let him know about the sad state of disrepair in Jerusalem. He found out that the wall was broken down, the people were discouraged and God’s name was held in disgrace.

He began to mourn and fast, and pray for his brothers and sisters in Judah. He was in a key position to ask for the King’s help, but he waited. He delayed for about 4 months before he spoke to the King on behalf of his people.

For four long months, he fasted to adjust his own attitude. He prayed to seek the face and will of his heavenly father. And he continued to weep for his fellow countrymen.

So, when he spoke on their behalf, he was well prepared to make his case.

The king responded very favorably and Nehemiah led a group back through the Fertile Crescent to Jerusalem. They got to work on rebuilding the wall and protecting the people.

But it all started with a four-month delay, a delay focused on preparation. Quite literally, Nehemiah was “measuring twice” before he “cut” once. There is a great lesson for all of us in this story and this week is a good time to practice it.

If you are facing a major decision or have a serious conversation that needs to be had; if there is a move or huge change in the wind, may I suggest that you pause and prepare. Bathe the situation in prayer. Fast and seek the mind of God on the matter. Wait and let your emotions find an acceptable expression. Weep if necessary.

But take time to prepare. Your own heart needs preparation. Your family may need time to adjust. Your co-workers need the opportunity to weigh in. Flippant decisions or rash actions almost always lead to sub-par results. Let’s all measure twice this week. Cut later. 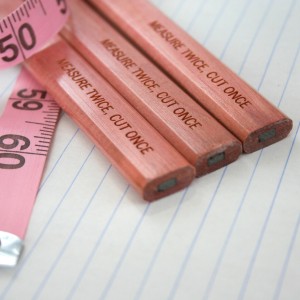