Every year at Christmas and Easter, Pastors and Bible teachers scramble to find a new and interesting way to look at these familiar scriptural accounts. In that spirit, I would invite you to consider the crucial role Migdal Eder played in the birth of Jesus.

Geographically, Migdal Eder is a special sheep grazing area situated about one mile outside the town of Bethlehem. It borders the main road between Bethlehem and Jerusalem.

The name literally means “Tower of the Flock.” It is first mentioned in the book of Genesis (35:21) as the place where Jacob journeyed after the death of Rachel. Micah also prophetically mentions this grazing land (4:8) as the area from which the promised redeemer would come.

As the Christmas story unfolds in Luke, we are told that Mary brought forth her son and laid him in a manger. That term for “manger” could be translated cave or shed or stall. And the first announcement of His birth was made to shepherds abiding in the adjacent field, keeping watch over their flock.

And this is where it gets interesting. The stall that held the baby Jesus was in this field known as Migdal Eder. Those watching the flock were no ordinary shepherds and this was no ordinary field.

Alfred Edersheim (a 19th century historian) in his very important book entitled, “The Life and Times of Jesus Messiah” asserts that the watchtower in that area was distinctive. It over looked a unique flock and was manned by specially trained shepherds. The shepherds were charged with the task of tending an unblemished flock. They knew how to make certain that none of those sheep were hurt or damaged in any way. They were to be perfect and therefore acceptable for temple sacrifices.

Jewish oral tradition (the Mishnah) supports Edersheim’s comments and adds that the males would be separated out for the burnt offerings and the females for peace offerings. These shepherds watched over the Passover lambs.

Some Jewish writers even contend that those special lambs were wrapped in a soft cloth to ensure their perfection. They called those cloths “swaddling clothes.”

So this week, in the context of the Christmas season, let’s spend some time thinking about those shepherds at Migdal Eder. They were watching over a very special bunch of sheep…in more ways than one.

And then we can all echo the words of John the Baptist, “Behold the Lamb of God who takes away the sins of the earth.” Indeed, the sinless, perfect Lamb of God was born to die. That’s the Christmas message! 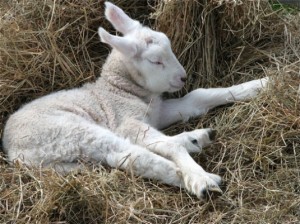