I got a new watch during my trip to Israel. And it is different. It does not have any numbers on its face. 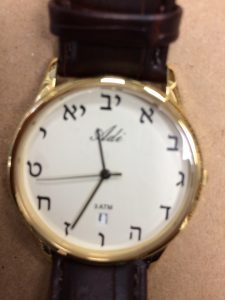 Instead, it has the first twelve letters of the Hebrew alphabet.

So why don’t the Jews use numbers?

There is a very interesting ancient tradition not to count with numbers. In the Old Testament, when the Israelites escaped from Egypt, Moses had each person give a coin in a kind of massive collection. They then counted the coins and knew how many were in their traveling group.

Apparently when Saul wanted to know the strength of his army, he had each soldier turn in a goat and they counted the goats. But in II Samuel 24, David announces that he wants to survey the tribes and get a very accurate count of his fighting men. His general, Joab tries to talk him out of the exercise stating, “May the Lord your God multiply the troops a hundred times over and may the eyes of the king see it.”

In other words, he was telling David to not determine his confidence for military victory based on his own resources, but rather to continue to trust in what the Lord does with those resources.

But David “overruled” his general, the men were counted and God was not pleased. A massive plague struck and 70,000 Israelites were killed.

Since that time, in order to seek God’s blessing, the custom has been reinforced to not use actual numbers, even on a watch face.

There is a very clear application for each of us this Easter week. We need to remember that our salvation is totally dependent on the finished work on the cross. Christ’s sacrifice and His alone has paid the price for the penalty of sin, yours and mine. We bring absolutely nothing to the table.

Instead, we glory in the truth behind the phrase, “It is finished.” We garner no spiritual “resources.” There is no spiritual activity, no religious fervor, no placating of the “gods” that even enters the picture. Our salvation came from the gracious gift of Christ’s death, burial and resurrection.

“For it is by grace you have been saved, through faith and this is not from yourselves, it is the gift of God, not of works, so that no one can boast.” (Eph. 2:8-9)

So every time I glance at my new watch, I am reminded of an amazing truth. It is a useless effort to try and “count” my resources or try to bring any personal achievements to His attention. I am to live by grace, following His leadership, trusting in His provision.

Oh the glory of the empty tomb!