His Name Written Over Mine

Years ago, a teenager named Brian Moore wrote an essay on what he thought heaven will be like.  In part, he wrote:

“In that place between wakefulness and dreams, I found myself in the room. One wall was covered with small index card files. They stretched from floor to ceiling and had very different headings.

It was a crude catalog for my life. Some brought joy and sweet memories, others a sense of shame and regret so intense that I would look over my shoulder to see if anyone was watching.

A file named ‘Friends’ was next to one marked ‘Friends I have betrayed.’ Some were almost hilarious in their exactness: ‘Things I have yelled at my brothers.’ Others I couldn’t laugh at: ‘Things I have done in my anger.’

When I pulled out the file marked ‘Lustful Thoughts,’ I felt a chill run through my body. An almost animal rage broke on me. One thought dominated my mind: No one must ever see these cards! No one must ever know of this room.

And suddenly there was Jesus. I watched helplessly as He began to open the files and read the cards. I wouldn’t bear to watch His response. I dropped my head and covered my face with my hands and began to cry again.

But He didn’t say a word. He just cried with me. Then He got up and starting at one end of the room, He took out a file and one by one began to sign His name over mine on each card. The name of Jesus was written with His blood.

As He stood and walked me out of the room, He placed a hand on my shoulder and said, ‘It is finished.’”

What an incredible thought for this week. Christ’s name has been written over all the accounts of my 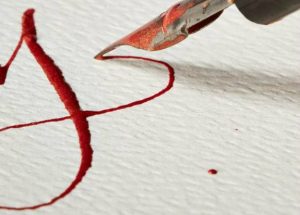 That statement in Greek is “tetelestai” and literally means “paid in full.” It is an accounting term written in the perfect tense. There is no English equivalent. The perfect tense is a combination of the present and the aorist tense. The aorist tense means that something happened at one specific point in time. And the present tense indicates that whatever happened continues to impact the future.

What a great thought…”It is finished”.  My sins are covered. On all my “cards,” His name was written over mine. What Christ accomplished on the cross two thousand years ago impacts me today. “Oh praise the One who paid my debt!”