Nothing is Too Hard for God

There is an amazing object lesson tucked into the book of Jeremiah that is very pertinent to today’s tumultuous culture. Let me share the historical context. Judah (the two tribes in the southern part of Israel) was warring with Babylon. Nebuchadnezzar, Babylon’s king was focused on conquering the nation and taking captives back to his capital.

For some 30 months Babylon’s army laid siege to Jerusalem. They surrounded the city and cut it off from outside supplies. Things were grim. Food was scarce. Water supplies were being choked off. Hunger and despair ran rampant. The citizens of Jerusalem knew their demise was imminent.

In the midst of that national despondency, the prophet Jeremiah got a visit from his uncle, Hanamel (see Jeremiah 32). Hanamel lived in Anathoth, a small city 3 miles north of Jerusalem. It had about 100 inhabitants and they too were under siege. The Babylonian army was literally camped on their land. 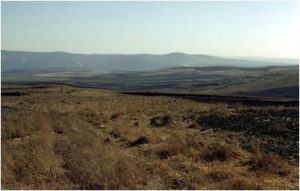 So Hanamel shows up and proposes that Jeremiah buy a piece of land from him. The Redeemer/Kinsman principle in the Old Testament insured that Jewish land never left the extended family. Jeremiah had both the right and duty to buy it from his relative.

But the land was worthless (picture the phrase “ocean front property in Arizona”). But in the end, Jeremiah buys the land for 7 ounces of silver (valued at about 2 months worth of hard labor). A formal “contract” is drawn up and the deal is sealed.

The purchase of this land is an amazing object lesson. God wanted to make sure that His prophet had a very tangible way to encourage the people. As they anticipated being carted off into exile, their hearts were heavy. God seemingly had let them down. Where was the hope?

You don’t buy land that you are never going to be able to use. You only invest when you have an eye on something’s future value. God was stating very clearly that nothing is too hard for Him. No conquest or exile would permanently keep His people away from Israel.

What a great encouragement for you and I this week. No matter what the pressure, confusion or stress in our lives, nothing is too hard for our Lord. No political upheaval or confusing national conversation is enough to throw us off our game. No financial pressure is enough to separate us from His love and provision. No relationship strain can permanently separate us from His care.

We can answer the question God posed to Jeremiah: “I am the Lord, the God of all mankind. Is anything too hard for me?”