Passing Along a Word from Our Father

A few years ago during the height of the war in Afghanistan, a cool thing happened in the Atlanta airport. As a group of young soldiers were making their way through the terminal in their camouflaged uniforms, a little girl, maybe 6 or 7 years old ran up to one of the young men.

As he knelt down to say “hi,” she asked him if he would give her daddy something for her. He replied that he would try

and then she suddenly grabbed his neck and gave him the biggest bear hug she could muster and kissed him on the cheek.

The young soldier had the presence of mind to just “go with it” for the sake of the little girl. And that alone makes for a very neat story. But it doesn’t stop there.

Then he walked up to the mom as she held that little girl. And he said, “I spoke with your daddy and he told me to give you this.” He leaned over and gave her a kiss on the check. And then he went on to say, “Your daddy also told me to tell you that he loves you very much. He misses you a bunch. And he can’t wait until your family is all together again.”

I am certain the mom was bawling by that time. I was…even as I read the story. The first soldier was thoughtful and reassuring. But the second guy really understood human nature. He gave the girl and her mom some hope.

That is exactly what the Lord was doing in John 14. He had just told his disciples that he was leaving them. They were heart broken so he went on to say, “Don’t let your hearts be troubled.” And then he led them through a whole series of affirming statements of fact. He reassured them by reminding them of their allegiance to Him. He comforted them with the realization that He was leaving for a purpose and would be back-“I am going to prepare a place for you…” He gave them some hope.

This week, as you and I review those verses we need to look around and see who is hurting in our world. There are people all around us who are “missing” their heavenly Father. Their hearts ache from a divorce or the pain of an ongoing illness. They hurt for children who made poor choices or a spouse who lost a job. Or maybe they are just tired of living in disobedience.

When we identify such a hurting soul, we really do need to do just what that second soldier did. Lets go up and do the proverbial “walkie-talkie” thing and let them know that our heavenly father cares. He is crazy about them and can’t wait for us all to be together! 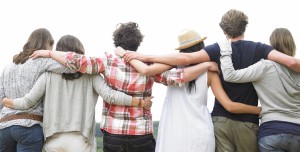