Ever since I became a follower of Christ, I believed that the term “prodigal” (used in the story about the lost son in Luke 15) meant something like scoundrel or wayward child. I thought it carried the idea of a son “gone bad.”

But I heard a message recently by Buddy Owens (a pastor at Saddleback Church) that turned that understanding upside down. And with that upheaval came an astonishing revelation that the “prodigal” in that story is really the father. Let me explain.

With that clarification in mind, it is easy to see that the extravagant giver in Luke’s parable is the young man’s father. And, by extension it is also our heavenly Father.

The story tells us that when the boy finally “came to his senses,” he returned home not expecting anything but maybe a servant’s role in the household. But instead, from a long way off the father saw him, ran to him, embraced him and gave him three gifts.

He gave him a robe that would have signified the boy’s identity as the father’s son. He gave him a ring that would have denoted his authority as a full member of the family. And he made sure the boy had new sandals as a picture of his restored dignity. In that day and age, only slaves ran around barefoot. 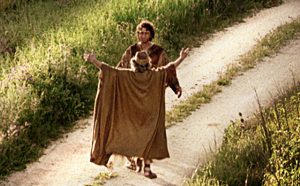 The father’s reaction was one of extravagant blessing. That dad was the true prodigal. He dearly loved that boy, regardless of his son’s selfishness and sinful choices. And his actions showed just that.

And so it is with us. This week let’s take the opportunity to bathe ourselves in the blessings from our prodigal heavenly Father. His extravagant love should wash over the distractions and fears of our lives. His graciousness knows no boundary.

Let’s take to heart the words of I John 3:1 “See what great love the Father has lavished on us, that we should be called children of God. And this is what we are!”