Over Protecting Our Kids

Not long ago I read an article in an English online paper about a Polish priest who was warning parents to be on their guard against Lego toys. He was warning them that those “plastic bricks are a tool of Satan and can destroy children’s souls.”

Apparently he was specifically focused on a series of monster fighters and some zombie mini-figures. Father Kostrzewa said, “Friendly fellows have been replaced by dark monsters. These toys can have a negative effect on children. They can destroy their souls and lead them on the dark side.”

Not too long after reading that article, I saw where a school in Queensland, Australia has banned all unsupervised 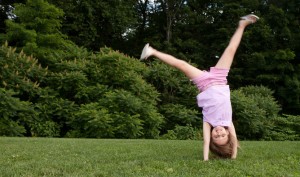 cartwheels on the playground.

Apparently a couple of kids have been injured recently, one broke a wrist and the other was kicked in the head. Both apparently happened while the kids were doing some cheerleading type stunts during recess and lunch. So now kids can only do cartwheels or handstands when “properly supervised by a trained PE teacher.”

Over the course of the 32 years I have been leading Stoneybrooke Christians Schools, I have seen a similar “march to safety” on behalf of our children. Our playground no longer has a real slide, there are no swings and the climbing equipment must have “an approved surface” under them.

And I am all for ensuring that the play areas are indeed safe for kids. I agree that things that are broken or in need of repair should be addressed. Age appropriate equipment should be reviewed for safety sake.

But I think we are going a bit too far. Pretty soon we will actually have our kids safely ensconced in that proverbial plastic box and nothing bad will ever happen to them…or not.

From my vantage point, a happy, productive, growing childhood must contain some reasonable risks. Even though occasionally a child falls, kids need to climb. Even though arms do get broken, games should be played. Even though monsters can be made out of seemingly innocent blocks, kids need to use their imagination and build things.

As is true in many aspects of life, it is the “stretching” that allows for growth. An occasional bump, bruise or scrape calls for band aids, not banning.

Just something to think about this week.