Snow Dogs (and other problems)

About 15 years ago Disney pictures produced a fun movie called “Snow Dogs”.  It was the story of a successful suburban dentist who inherited a dogsled team and a rustic cabin up in Alaska.

The movie humorously chronicled his attempts to master the sport of dog sledding and adjust to life in the great outdoors. On one of his mushing trips, the young city slicker (Ted Brooks) gets thrown from the sled and lands in a deep snow bank. As he struggled to get to his feet, a huge bear appears. Ted tries to get away by running down the mountainside.

But he falls and lands on a precarious precipice. He is excited that he is still alive but just then the ledge gives way and he rockets down that mountainside at full speed. He ends up on a thin layer of ice covering a lake.

As the surface of the lake begins to crack, Ted temporarily grabs a floating piece of ice only to slide off into the frigid water. Instinctively, he pulls out his cell phone and dials 911 only to hear the famous recording, “You are outside your service area. Should you like to expand your service plan, please call back during our business hours.”

Things just kept going from bad to worse for Ted.

The good news this week is that help for all of God’s kids is just a “call” away. When we reach out to our heavenly Father, we will never hear a recording. We will never be directed to call back during normal business hours. We will never have to key in our password in order to talk to a live person.

The psalmist declared in Psalm 34, “The righteous cry out and the Lord hears them…” We can bank on that truth.

I doubt that many of us are dealing with troublesome snow dogs right now. But if life is dealing you a series of blows, tie a proverbial knot on the end of your rope and cry out to your attentive heaven Father. He will answer! 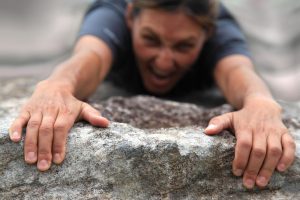