Last weekend, the current Marvel action hero movie grossed over $400 million in just the first few days of its release. It struck me that our culture is extremely hungry for heroes to admire and emulate.

This week, I would like to offer up three modern spiritual heroes that could easily go up on my wall of admiration. I have often said, that I do not want to be in line behind these guys at the Judgment Seat of Christ. I would be stuck there an extremely long time as they collect their crowns and go lay them at the feet of Jesus.

My first modern hero is “Papa” Chuck Smith of Calvary Chapel. When I think of his legacy, I am struck by the incredible number of pastors that he mentored and the thousands of churches that were started because of his influence. It has been said, that he never bothered to track those numbers.  But, today, we know there are over 1700 churches that associate with the Calvary Chapel brand.

And then there is Bill Bright the founder of Campus Crusade for Christ (Cru). In the early days of his ministry, he wrote the little gospel booklet “The Four Spiritual Laws.” That simple presentation of the “good news” has been printed in 200 languages and distributed over 2.5 billion times.

Over his lifetime, Bill wrote more than 100 books and booklets. And the very well known “Jesus Film” has been translated over 1000 times. Cru’s current goal is to have 5 billion people see the film by 2025.

To date, through Bill’s influence and the service of hundreds of faithful servants throughout the Cru ministry, there have been over 490 million worldwide decisions to follow Christ!

And lastly, I would add the incredible ministry of Billy Graham. He passed away last week at the age of 99. In his lifetime, he spoke to more than 200 million people in 195 cities all around the world. He held 417 separate crusades plus hundreds of other rallies and services.

He is the author of 33 books and met personally with 12 of our 43 presidents. Millions of men, women and children will one day stand before Christ, clothed in His righteousness because of Billy’s faithful proclamation of the gospel. His simple messages will ring down through the ages as an example of what one voice submitted to the Lord can accomplish.

The latest action film may very well be worth seeing. Entertainment is good. But I am encouraging all of us to do a bit of marveling this week. Consider the lives of those who have gone before us. Consider the sheer volume of folks who can now name the name of Christ because of their work. 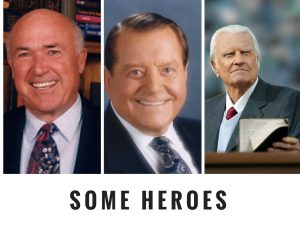