Last spring, I had the great privilege of leading a group to Israel. We visited many of the traditional sites that I had seen before. But because the political situation was very calm, we had the special treat of visiting Bethlehem in the West Bank.

The Church of the Nativity is believed to have been built above a cave where Mary and Joseph delivered the baby Jesus into the world. Constantine and his mother Helena commissioned that church. It opened in 333AD and is believed to be the oldest complete church in the Christian world.

In 614 AD a Persian army invaded Palestine and destroyed many churches in the country. The story goes that this one was spared when some of the soldiers noticed a mosaic on the wall that depicted three wise men that were dressed as Persians.

The doorway into the portion of the church that contains the spot where it is believed Jesus was born is currently much lower than the rest of the surrounding walls. It was lowered in 1500 AD in order to stop looters from easily driving their carts into the space.

Today you can go look into that “room.” I stood in line, suffered through very poor air quality due to all the candles and finally made my way in. But like everyone else, I had to stoop down and kneel to actually see the area.

Isn’t it remarkable that the place of our Savior’s birth can only been seen if we are willing to kneel down?

It is the season when we remember that birth. So it is a good time to remind ourselves that humility is one of the most important virtues that God’s kids must exhibit. It is the opposite of the “me first” attitude that floods our current society. 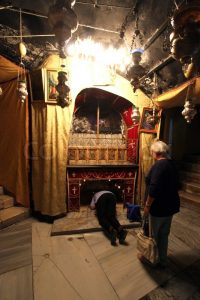 If we were in Bethlehem this week, we would all have to stoop and kneel to see that special spot. So let us practice right in our own homes. Let’s “stoop” and help with chores around the house. Let’s “stoop” and serve a loved one (especially those that irritate us). Let’s “stoop” and care for those who smell different or speak a different language or work in a service industry. Let’s humble ourselves.

It really is the only way to “see” that baby!