A recent scientific study asserts that talking to yourself is really not a sign of madness, but rather it might indicate that you are “smarter than the average bear.”

Truth is lots of us make fun of others who talk out loud to themselves. But the experts at Bangor University stated, “Talking out loud, when the mind is not wandering (like while you read instructions) could actually be a sign of high cognitive functioning.”

There is an example in the Bible of someone talking out loud to himself. In I Samuel 30:6, David is greatly distressed. The Amalekites had destroyed his hometown of Ziklag and carried away the families of David and his men. David feared that his own men would rise up in rebellion and stone him.

Right at that moment, the scripture asserts that David “encouraged himself.” He started talking and praying out loud. One translation mentions that David “found strength in the Lord his God.”

I am guessing that David was reminding himself of what he already knew. He was rehearsing what the Bible says about God and His promises. He was reassuring himself that the Lord had a plan for him and his men. He was encouraging himself and remembering God’s commitment to protect their families.

His talking out loud had an amazing purpose.

Two years later, David penned Psalm 34 and highlights again what he knew to be true: “I will extol the Lord at all times, his praise will always be on my lips.”

This week, I doubt that any of us have had our hometown destroyed or our entire families carted off into captivity, but I am certain that the enemy has been active in all our lives. The pressure builds, frustration grows, expectations climb and soon we find ourselves cornered and discouraged. 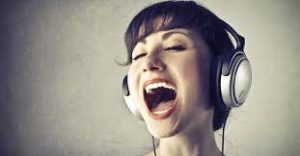 May I suggest that we act like David and start talking out loud to our heavenly Father. Start with a crisp review of what you already know to be true. He loves you. He was not caught off guard by your current situation. Nothing is happening that wasn’t “Father Filtered.” He has a plan that includes your best interest and His eternal perspective drives it all.

Say it out loud. Say it with conviction. Sing it. Add some praises and worship. I am confident that His peace will prevail! (And ignore anyone who teases you for talking out loud!)