A few days ago was Mother’s Day and appropriately most of us heard a Bible lesson that day on the incredible value of our mothers. There is no doubt that God had a special role for them to play in all our lives.

But I got to thinking about the Gebirah. The Gebirah was an official position in the southern kingdom of Judah (the rulers in the Northern Tribes did not recognize the role). The term means “Great Lady” or “Queen Mother.” In the royal court, she was second only to the king in influence and importance. She literally sat on a throne just to his right hand, wielding power of her own.

When Judah finally fell to Nebuchadnezzar, the King of Babylon, the nobles and officials all surrendered to him. The Queen Mother is specifically mentioned in II Kings 24 as part of that official group who surrendered their authority and power.

The Gebirah was mentioned some 15 times in the Old Testament. There are only three accounts of kings that don’t mention the queen mother (the wicked daughter of Ahab and Jezebel and two moms that probably died before their sons took the throne).

She was the king’s chief counselor; a confidant and often she interceded with the king on behalf of the people (See I Kings 2:13-21). A king might have hundreds of wives and concubines, but only one mother. And she mattered!

I think that is the “take away” this week. Our mothers matter! There is still a “Great Lady” in most of our families. As adults, our mothers no longer “call the shots” but they do have influence and that influence should be valued. Their advice and counsel should be treasured regardless of our age or standing in life.

The Hallmark version of Mother’s Day is over, but there is still plenty of opportunity to cherish the input from a godly mom. Maybe we ought to pick up the phone and invite the Gebirah in our lives to nudge us along. We really do need their input and prayer support. 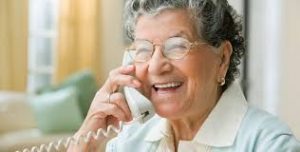