Trapped in Cable Cars (or anywhere else)

A few weeks ago, I read a story about dozens of tourists who were trapped over night in cable cars over Mont Blanc in the Alps. About 110 people, including a 10-year-old were stranded after high winds tangled the wires that operate the pulley system.

The people were in 36 different cabins strung all along the mountainside. While there was daylight, many of them were rescued by helicopters. But once night fell, the other 45 men and women had to remain in those dangling cabins. Thankfully though, almost 10 hours later, they all were successfully rescued.

What struck me about the story was a single line buried in the details of the account: “The first aiders spent the cold night in the cable cars with the trapped people, who were given blankets, food and water.” 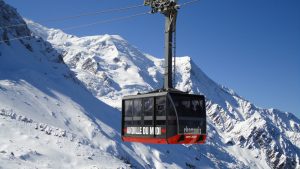 When the rescuers couldn’t get them all out at the same time, they got into the cabins with the frightened people. They suffered through the cold night right alongside them, offering comfort and companionship right in the midst of the difficulty.

No one was shouting platitudes of encouragement from the helicopters or swinging over supplies in a canvas bag. The rescuers got into the gondola with the stranded tourists; they were literally in there with them!

I couldn’t help but think of the wonderful verse in the first chapter of Matthew (verse 23): “The virgin will conceive and give birth to a son, and they will call Him Immanuel (which means, ‘God with us’)”.

God saw our predicament and instead of emailing some Biblical encouragement or a long list of spiritual things to do, He came and “pitched His tent” among us. He felt what we feel. He suffered rejection, physical pain and personal trauma. He knew loss. He had family dynamics. He was tempted. He understands us because He came and lived with us.

Remind yourself this week, that regardless of the tragedy or difficulty, our rescuer is right there in the midst of our circumstance. That peace that passes all understanding fills our hearts as He sits right beside us. Whatever your situation this week, I promise you that God is there already!