Wanted Dead or (and) Alive

“Wanted dead or alive” is the message that often appeared on posters featuring criminals on the loose. Apparently the first wanted posters appeared in England. They featured “outlaws” (criminals who were outside the protection of the law). In the US, wanted posters started to show up a lot in the later part of the 1800s.

Railway security firms like the Pinkertons, banks, states or even vigilante groups would issue them. The first one for Jesse James was for a $500 reward. A few years later, the governor of Missouri issued another poster with a $25,000 reward. He was fed up with James’ 12-year robbing spree.

My favorite one was for Oliver Curtis Perry and it had this notation below his picture, “The above likeness is a good one but flatters. His face is not so full and lips are thinner.”

So what if you or I had a wanted poster, how might it read? 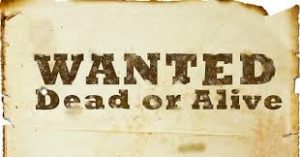 “Wanted Dead”? Yes, there is a sense in which God’s kids are dead. Paul says to the Christians in Rome (Romans 6:2): “…we are those who have died to sin.” It’s not a physical death, but a spiritual one. At the cross, God removed our addiction to sin and let us “die” to its hold on our lives. Romans 6:7: “…anyone who has died, has been set free from sin.”

“Wanted Alive”? Yes there is also a sense in which God has made us alive. In that same epistle Paul says, “…just as Christ was raised from the dead through the glory of the Father, we too may live a new life” (verse 4). “Dead to sin, but alive to God in Christ Jesus” (verse 11).

I am not sure about a physical likeness on my own wanted poster. But I do know something about the verbiage that might be written there. It would declare me dead to sin and alive in Christ. And the dollar amount would read “Priceless.”

The old hymn “Jesus Paid It All” captures the thought. “Jesus paid it all, all to Him I owe, sin had left a crimson stain, He washed it white as snow.”

This is a great week to remind ourselves that we were (are) wanted. As believers, there is a clear sense in which we are dead to our sin. And praise the Lord; there is also a clear sense to the great truth that we are now alive by His grace.

These are wonderful thoughts to start the week…wanted: dead and alive!