I just finished teaching a six-week series in Bible study on the topic of having margins in our lives. I worked my way through Richard Swenson’s book, Margins. The later part of that study had a great deal to do with resources and finances. And frankly it provoked the question, “What is enough?”

Maybe it is helpful to review a couple of current statistics. The median income level in the U.S. is just over $56,000. Contrast that with the worldwide income figure of $9,733. If we make more than $32,000 a year, we are in the top one percent of the entire world.

And yet, we have little in savings (most of us less than $1000 in the bank); carry an average of $15,000 in revolving credit card debt and our society experiences over one million bankruptcies per year. 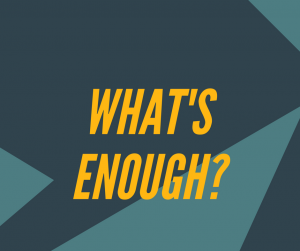 We are driven to have just a little more.

We want a little more income, a little longer vacation, a bigger house, a little newer car, and a bunch of newer clothes. We want more.

Kant once remarked, “Give a man everything he wants and at that moment, everything will not be everything.”

The Bible has much to say about contentment and this week might be a wonderful opportunity to set aside some times to review our Biblical perspective on “stuff” and the contentment it does or does not bring.

J.I. Packer said, “It is essentially a matter of acceptance from God’s hand what He sends because we know that He is God and therefore it is good.” And I might add, it is enough.

This week, let’s chew on Paul’s thoughts out of Phil. 4: