One of the key characters in the biblical Christmas story is the father of John the Baptist, Zacharias.  His wife, Elizabeth is the cousin of Mary and their story is told in Luke 1:5-80. Both of them had priestly heritage and are described as “…and they were both righteous in the sight of God, walking blamelessly in all the commandments and requirements of the Lord”. But, they were old and did not have any children.

Zacharias was a “day class” type of temple priest. These were 24 classes (groups) of priests who rotated in their service at the temple. (See I Chronicles 24:7-18 and II Chronicles 8:14.)  The incense in the “holy place” was kindled twice a day, at dawn and again late in the afternoon, by a priest chosen by lot. And it was Zacharias’s turn. This could only happen once in a lifetime, so this was a very special day for him.

While Zacharias was in the Holy Place putting frankincense on the coals, an angel appeared to him. It was Gabriel who announced that Zacharias and his wife were going to have a son and that they were to name him John. The angel went on to describe the ministry that John would have relevant to Jesus, “…he will turn back many of the sons of Israel to the Lord their God. And it is he who will go as a forerunner before Him (Jesus) in the spirit and power of Elijah…” (vs. 16-17).

What a revelation! What an honor! What a moment to stop and praise the Lord for His great mercy and blessing!

But instead, Zacharias responds in frustration and unbelief. “How shall I know this for certain? I am an old man and my wife is advanced in years.” It is his big moment and he blows it with a useless list of “earthly” facts that allowed him to totally ignore the supernatural thing God wanted to do.

And so he got tongue tied. Quite literally God made him speechless until the day of the baby’s circumcision. At that moment, Zacharias was able to speak and he rightly named the baby John. And the bible goes on to say, “And they were all astonished and at once his mouth was opened and his tongue loosed, and he began to speak praise unto God.” 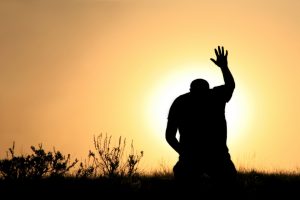 Better late than never…Zacharias says what he should have said nine months earlier. “Praise the Lord; we are going to have a special baby!”

Aren’t we just like that? God wants to bless us through a specific assignment, perhaps even in a supernatural way and instead of responding in faith we start listing all the reasons why it makes no sense. We drag our proverbial feet and the blessing goes by.

Maybe this Christmas season is an ideal time to stop the rampant unbelief and instead chose to trust our Savior. We should take stock this week in what the Lord has in mind for us. Is there a service to render? Is there a message to share? Is there a wound to heal? Let’s be quick about it, before you and I find ourselves “tongued tied” too!